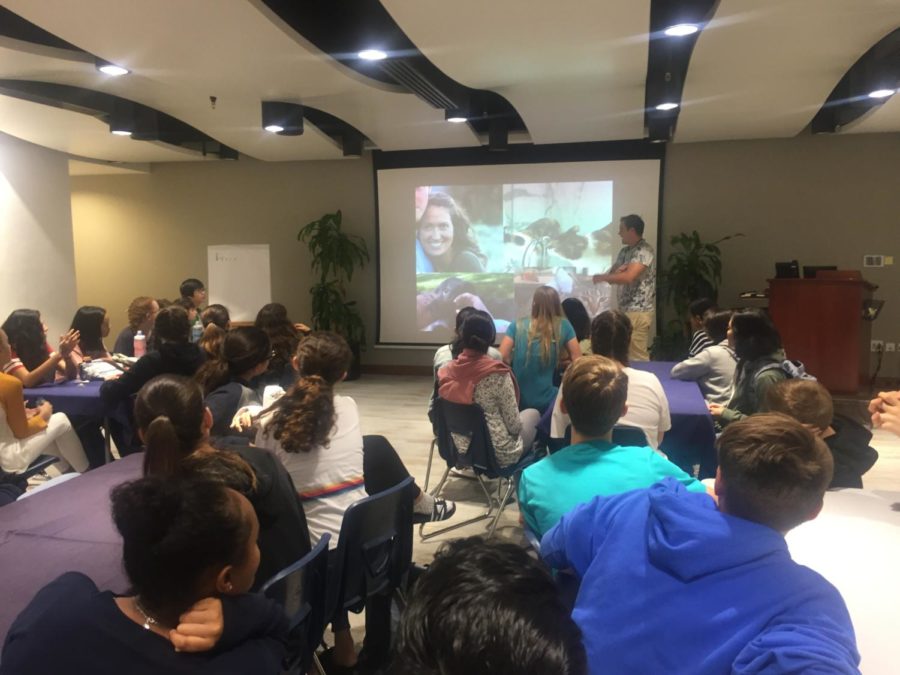 Grade 8 service learning classes, had the honor of spending time with guest speaker,  Mr. David Jonsson, founder of World Volunteer. On 17th October,  Mr. Jonsson spoke with ASD students about his run small scale development projects with the minorities in Laos, Southeast Asia. Mr Jonsson set up World Volunteer to inspire and engage the youth into taking action. As he states “solving real development challenges for communities in need of support, giving our volunteers a real volunteer experience based on local living conditions and culture and transparency during a long term engagement with partnering volunteers and local communities.”

These volunteer programs to build the eco guest houses, not only create financial sustainability for the local community, it also enables students to contribute to positive sustainability and learn about community development projects. The United Nations defines community development as “a process where community members come together to take collective action and generate solutions to common problems.”  Neil U. (18), an ASD student who embarked on the trip with several other students, said that “The trip to Laos was real. Unlike other service projects, you’re directly involved with the village community, engaging in discussion, exposing yourself to their culture, all while doing purposeful, manual work in hopes of developing a community you’ve grown to know and love.”  Mrs. Jones, a teacher that also attend the service learning trip, stated that,“The students worked super hard to build the eco-bungalows, but it was satisfying work and a service project that you could see would be sustainable.”

In 2018, ASD will host another opportunity for High School students to travel to Laos and take part with the World Volunteer organisation. They may even be staying in the houses of the villagers to fully immerse themselves in the culture of some of Laos’ villages.

Mr. Jonsson said, this idea started when he was young and lived in Sweden, before moving to Laos at the age of seven where he became more involved with the culture and people by learning the language. After graduating from High School, he took a gap year before starting to work with several Hill Villages of ethnic minorities. He tried to find ways to work with to be more sustainable and to let their possibilities for the future grow by encouraging tourism in their areas. He did this by partnering with several agencies so that they could bring their tour groups to stay at the bungalows.

He wanted to find a way to empower the local community to generate an income and work towards the sustainability of their local communities, and came up with an idea for creating an eco-friendly bungalow. The eco bungalows are  sustainable and thus environmentally friendly resources were used, like mud bricks in an adobe construction method. Using mud bricks made by the villagers and volunteers as building materials reduced the cost by over 60%.

You can learn more about the ongoing projects and how to help at the official World Volunteer Organization site. http://world-volunteer.com/