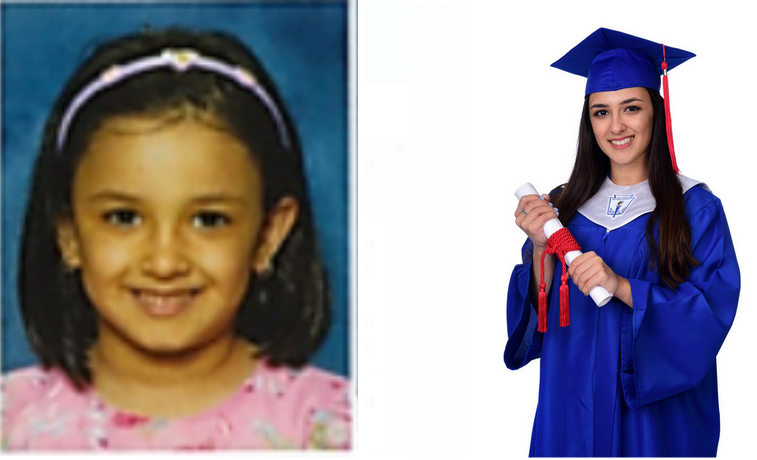 Childhood photo placed beside a graduation photo of the same student Image illustrated by Tala A. (’20)

Childhood photo placed beside a graduation photo of the same student Image illustrated by Tala A. (’20)

Jacob S. and Tala A.

A collection of interviews discussing the feelings of seniors – both old and new – of the Class of 2020 and their expectations about their last year of high school.

Tala A. talked to seniors who have been at ASD for quite some time, and Jacob S. talked to those students who are new to ASD about what they think about their senior year.

Some students have been in the ASD community since early childhood

As we welcome new students, ASD must also recognize the ones that have been here since the start. They still hold on to their memories of kindergarten classes in temporary classrooms, painting doves pasted on the walls and drawing on the chalkboard near the library.

In an interview with R. Ibraheem (’20), a student who has been at the American School of Doha since kindergarten, she mentioned that one of her fondest memories was when “classrooms were in trailers.”

A. Medani (’20) remembered the first day of school in second grade when, she says, she would “always get excited to see the new students and teachers.”

It’s not surprising that long-time students frequently mentioned some of the biggest changes have been the growth of the school itself and the capacity of students it holds. While R. Ibraheem (’20) noted the transition from trailer classrooms to solid brick-and-mortar ones, many others mentioned that there were simply fewer buildings a few years ago. E. Elmoli (’20) explained, “the biggest difference from when I first enrolled in the school to now would definitely be how much ASD[‘s campus] has grown.”

M. Amani, another student who has been in ASD since kindergarten, agrees: ” I would say the biggest change is the number of people who come to ASD now.”

While there might have been many changes involving the school over the past 13 years, these students have been there to see it all.

And some soon-to-be graduates have just joined ASD

Each school year brings new remarkable students to ASD who look forward to meeting lifelong friends. However, new students coming in during their senior year might feel social pressures to be likable in a short amount of time. And with pre-existing cliques of friends who have been together for many years prior, it may be daunting to make friends.

We wanted to know about, primarily, their transition between high schools, so we asked about both their new academic challenges and social expectations. In a series of interviews, some new students expressed their opinions about coming to ASD as members of the senior class.

One new student stated that “adjustments of every form always have some amount of emotional impact, and even more so in the context of a school. I think the biggest causes of the emotional impact of coming to ASD are (A) finding friends, (B) adjusting culturally, and (C) doing all of this during college apps.”

Senior year seems to be a difficult and busy time to have transferred schools, especially considering the level of academics offered at ASD.

Another new student said that “this has been my worst academic year.”

It’s understanding that transferring schools is hard academically; however, many students — new and old — seemed to share the same opinion when it comes to ASD’s curriculum. It’s challenging – much more challenging than most public schools.

ASD enrolls elite students and educates them to be the best, always encouraging and showcasing their potential.

In addition to the difficulty of the curriculum, ASD’s grading system has changed multiple times over recent years, and some of these changes have provided further challenges.

Another new student said that her old school used a 1234 grading system. “1-2-3-4 is different than A-B-C-D!” she said, noting that while it was difficult to adjust to ASD’s letter grading system, the teachers are there to help when she has needed support.

Another common topic among new students is the issue of finding friends. New seniors expressed mixed feelings about this year’s seniors. Some seem to think the class of 2020 is quite cliquey, and others believe that there are small friend groups all around, although they are not necessarily exclusive.

Despite the seeming difficulty, it doesn’t seem so bad because the new students said they found it quite easy to find a group that works for them. One new student said it brilliantly: “Coming into senior year, I definitely felt the divide of different friend groups, but everyone seems to be friendly to each other. They are not defined by any characteristics that exclude people from becoming their friends.”

Another stated, “People have grown up a lot and realized there’s a lot to gain from talking to a variety of people.”

Finally, graduation. It seems like every senior at ASD is just ready to get out and start living, doing stuff on their own. It’s the same with the new students as well; they are ready to put on their caps and gowns, walk down the aisle, snatch their diplomas, and bid farewell to high school.

While there might be sorrow among the new students at not having the opportunity to graduate with lifelong friends, they say they’re happy to be graduating with amazing people who support and care about them.

They sure have met some lifelong friends.