The man behind the title; an interview with ASD Director Steve Razidlo 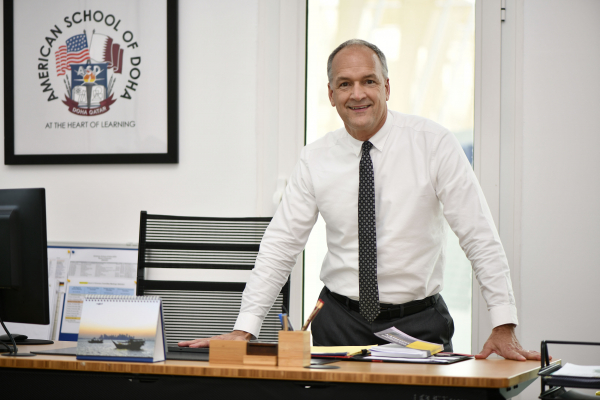 Claire R. and Ranad B.

Some students only know Mr. Steve Razidlo through his impressive and unique title as the Director of ASD. Most students don’t even know the director exists at all! Just who is the man in the chair? Well, read on to find out . . .

His exciting backstory begins in Minnesota, USA. In his early adult years, a shocking event occurred: his family moved to the east coast! Despite traversing the country, he still feels that he is part of the Minnesotan community, and will forever consider the state as his own. Once he arrived in Maine, he started becoming the dedicated and hardworking individual he is today in part thanks to his wonderful and inspiring teachers.

Two specific teachers shaped his future in incredible ways: Gary Wagner and Ross Mason. Mr. Wagner, acting as his geography teacher and high school basketball coach, “sowed the seeds of curiosity about the world” for a simple boy who “didn’t know much about [it].” Mr. Mason furthered this global exploration by daring Director Razidlo to believe he could reach even his most challenging goals.

While they may have been very different teachers, both taught him to aim high and aspire to be his best self, which stayed with him for years to come. These experiences highlighted the importance of high school teachers in shaping students’ futures to the director, which led him to include these stories in his interview with ASD for his current position.

In college, he described himself as a very “atypical” student; eight years were spent on his undergraduate degree, with periods in school and out of school. He started out with an academic scholarship at his first university, but later ended up changing universities twice more, having studied at a total of three universities! After many triumphs and challenges, he finally got his first degree at the fresh age of 27 years old, and later on, received two more degrees. (Impressive!)

As a lifelong student, he has learned many things through trial and error, as many people do (and if they don’t, they’re likely doomed). One thing the director highlighted was that he learned to be “open to sincere and meaningful challenges,” which “can lead to many rewards.” He expanded on this with a personal anecdote, discussing one of his children. He reveals how his child struggled greatly with IB Chemistry, which many students can likely relate to. Despite the obstacles and self-doubt, his son stuck with the course. It completely transformed his college career for the better!

He then added another personal anecdote about his own high school experience. Director Razidlo reveals how he had the opportunity to take a typing class back in high school, which he quietly shares as being bad at, but had forgone it in fear of getting bad grades. Upon further reflection, he admitted that he regretted that decision as he is still, to this day, a slow typer. Concluding his thoughts on challenging oneself, he muses over how ASD gives students many significant opportunities, which he urges them to take as it “provides you with the chance to challenge yourself” and lead “your life in different directions.”

Now, onto information about his family! At his first university, he met the love of his life! They have been married for 38 years. To our shocked delight, his wife is also from Minnesota! As some say, birds of a feather flock together. Later on, they went to get married at the early age of 21 and 22 respectively, a testament to their love and commitment towards one another. Together, they grew a charming family of five kids, with an age range between 19 and 36 years old.

His motivation to become an educator stems from his insistence that “it’s one of the noblest professions on the planet” and that there’s “nothing better than helping young people become who they are supposed to be.” He insists that he loves his job, which his interviewees could clearly see.

After graduating with a degree in education, he moved back to Minnesota, where he worked as firstly a teacher, then a principal for seven years, then a superintendent of a public high school district of over 650,000 students for six years.  After seventeen years in the same community, his family decided to see other parts of the world. When he applied to Vienna, he wasn’t sure he’d get the position, but he took a “leap of faith” to broaden the experiences of his children through travel and increase their cultural enrichment through immersion. This metaphoric leap into the unknown eventually led to the director arriving here, in ASD’s very own community!

Director Razidlo then goes on to discuss his current experience with the school. Thankfully, he notes his current impression of the school as highly positive: “I’ve been so respectfully and warmly treated that it’s been a pleasure to arrive.” He goes on to say that he was impressed by the quality of the people and administration despite the limits due to the pandemic. The director also adds how impressed he is by the opportunities and academic achievements of the school.

While his job has been greatly constrained by COVID-19, and he can no longer meet people in person, Director Razidlo declares that “we’ll make it.” Finally, he summarizes his experiences in Doha with a simple, yet heartfelt statement: “Great campus, great city.”